Last week I attended our workshop with Alica Forneret on grief. I was really looking forward to digging in and talking about grief, how it can swirl around a drain slowly, and then suddenly burst the pipes when you’re not expecting it.

You might think this is a bit late as a marketing attempt for a workshop. That would be true. But grief doesn’t let you meet your deadlines. Grief has its own interesting timeline.

When my father died

December 7th was the one-year anniversary of my father’s death. His death was a surprise, but not unexpected: he was 85. He died in his favourite chair, watching “the curling” – his favourite game since boyhood. My mom was just upstairs. My brother just a short drive away. I felt sad, but not like sobbing.

My family has always treated death as an unemotional fact, perhaps because farming life made it so. Cats were eaten by coyotes, dogs hit by cars, pigs slaughtered, cousins died. These happenings were not to be whispered, but smacked casually on the kitchen table, like the weekly newspaper.

My father and I mostly liked each other, as well as being kin. Our favourite topics were politics and local history. But we didn’t talk every week. I was often loath to call home. I knew I’d be shouting anecdotes from my life down the phone. Because his hearing was so damaged from years of driving tractor, he’d miss the punchline and often the point. I was so angry about his refusal to talk about hearing aids. “What’s the point of getting hearing aids, when it won’t fix your mother’s hearing?” was his frustrating logic. 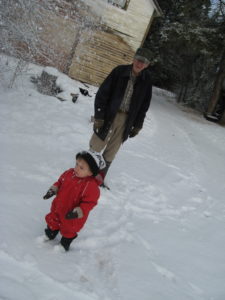 That week after he died felt like the way Christmas looks in happy holiday movies. Neighbours were constantly dropping by my mother’s house in my old Alberta hometown with casseroles, poinsettias and Christmas cookies. I was in charge of calling all my dad’s younger sisters for stories and memories. Inevitably, that lead to looking through vintage photo albums and newspaper clippings. Thankfully, even the most caustic of us turned into their most agreeable and helpful version of themselves.

We are the kind of family that worries a lot about being appropriate. And also the kind that doesn’t express emotion very easily. We like emotions to be neat and tidy – a hug at the airport security gate, love at the bottom of a card. The only time we are truly comfortable with spontaneity is making irreverent jokes. We were at our comedic best at the funeral home, discussing arrangements. Wouldn’t it be perfect to display our father’s manure-covered farm boots and tobacco-stained pipe at the front of the church? NO! My mother put her foot down, but she looked happy reigning us in.

Instead, we settled on a threadbare curling sweater and broom, smelling only slightly of barley chaff.

I returned to Vancouver just before Christmas and felt my mood plummet. Still no sobbing. Instead, I just felt like I was in exile. Back home, every trip to the grocery store meant bumping into someone who knew my family. Nobody here knew I was a person whose Dad had just died.

I took a lot of naps. Cooked a lot of frozen meals. It still felt inappropriate to cry or call it grief. What right did I have to cry like I missed someone, when I’d purposely moved away from that community? When I’d felt frustration, rather than joy, the last times we’d sat together in front of the TV at a silly decibel level. Crying was for good daughters who called home every week, and didn’t harbour grudges over unkind jokes, hearing aids, or television volume.

I meditated every day only because it was 15 minutes of intentional unthinking, out of 23 hours of sluggish avoiding. I didn’t feel better. I didn’t find clarity. I just wanted to be still, without seeming lazy.

A spirit that only wished me love

A few months later, in February, I went out for a drink with a colleague at Yoga Outreach, where I had only recently started to work. I shared the fact of my recent loss. Surprisingly, she said she’d been taking a course on intuition and had sensed a spirit hovering around me since we sat down. A spirit that only wished me love.

The Alberta voices in my head were skeptical. Anyone would say they sensed a loving presence hovering about, after I said my dad had died.

But I was eager to talk about my weird un-grief, the big grey fog of it, that I encouraged her to go on.

She said, “He says he’s sorry for … this is kind of weird…for being a bugger? Is that the right word?”

That’s when I finally cried. Leave it to my dad to say something totally inappropriate to my work mate at a social justice nonprofit. He’d refused to get hearing aids and join as at the table for cards because he was being a bugger. Ha!

Listening to the voices I choose 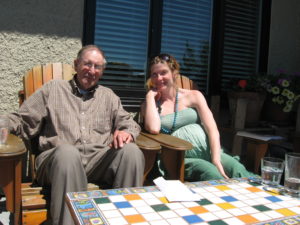 Me and Dad at my first owned apartment, and pregnant with my first baby.

After that, I was able to grieve my father instead of just laying around taking naps and parenting my children with Netflix. I remembered him tying our skates, building a treehouse, and showing us how to carve whistles from willow branches. And I stopped listening to the voice that wanted to meticulously document mistakes.

I’m the one that’s here. I can be one-sided if I like. Sometimes when I’m writing in my journal, I start to feel like someone is staring over my shoulder. Someone who refuses to get my actual point, but just wants to remark on my handwriting, or whether I’ve ever thought of getting paid for all that writing.

I write, “Did you need something, Dad?”

After a few moments, I think of him grinning his gap-toothed, tobacco-stained smile, and shuffling off to smoke his pipe.

This post was written by Yoga Outreach’s marketing and communications coordinator, Wendy Goldsmith